The rebuild continues, I'm using an alternator in place of the dynamo/ generator, can anyone tell me if I need to change anything else other than the unit itself please ? Thanks.
Life isn't complete until you have a pair of twin cams in the garage...
Top

You'll probably need a smaller belt, and best using the bracket for an alternator rather than the one for a dynamo. How do you plan to wire it?
Top

Yes I have it mounted, it was really the wiring I was unsure of as to whether I need to change anything. Car is already converted to negative earth.
Life isn't complete until you have a pair of twin cams in the garage...
Top

Many but not all alternators include a built-in regulator. If your does then you will bypass the original regulator (control box).
Bayless
1948 Prefect E93A
http://sailok.com/enfoprefect
Top

What type are you going to use, is it a stock Ford unit. I am using a stock Pinto 1600 alternator and brackets for an easy bolt on job. That alternator does use an external regulator though, the wiring is very easy to do.

I believe this is some high output, modern, fancy alternator which I got with the engine. No idea if it has a built in regulator or not? Anyone know what wiring changes are necessary?

Life isn't complete until you have a pair of twin cams in the garage...
Top

We have to first decide what alternator that is, I am gong to guess it has a built in regulator by the look of it but I could be wrong. You will be able to get rid of a bit of wiring and certainly the old regulator but the main power feed to the vehicle will have to be maintained. I think once we figure out the alternator you have and the stock Cortina wire diagram it will be easy to make a small wiring diagram with the appropriate changes. It might be easiest to run the alternator feed to the starter hot cable and the vehicle power feed can com from the same. The charge indicator light/exciter line will have to be sorted too.
Anglia 100e modified
Prefect 100e stock
Top

Thanks Brett Iâ€™ll take the alternator off again tonight and see if I can identify it. Just noticed on my MK2 which is standard with an alternator that it doesnâ€™t have a separate regulator so I think you are probably right that the newer one also has an internal regulator. Is there a way of confirming that?
Life isn't complete until you have a pair of twin cams in the garage...
Top

Once you get it off look for any ID on the thing, I suspect that the two pin plug is a power and ground?? The power to it would be through your charge indicator light I am going to guess. You may find a regulator unit under the tin cover? This is all guessing so once we know what it is I am sure there will be some kind of wire diagram on the internet. Maybe someone on here will recognize what that is off of? Does your unit resemble this one?
http://www.burtonpower.com/alternator-k ... kitxf.html
Yours may not be a Nippondenso but here is a diagram for example, find out what it is.

Appears to be a Denzo, and has an internal regulator. Now just need to figure how to wire it to my existing GT wiring loom.

Life isn't complete until you have a pair of twin cams in the garage...
Top

I thought as much, your alternator label tells the tale. The little diagram of the wire connection on the right side of the label shows the configuration of the little T-plug, "Ign" is supplied from current switched on/off from your ignition switch, "L" is coming from your charge indicator light.

You see how that is supported by this diagram.

You previously said that your car was converted to NEG ground, does it still retain a Ford regulator with it's original wiring?? Perhaps like this Mk2 regulator??

The only clear wiring diagram that I could find on the internet is from a later lotus Cortina, I think it should be similar to your car as far as charging goes. 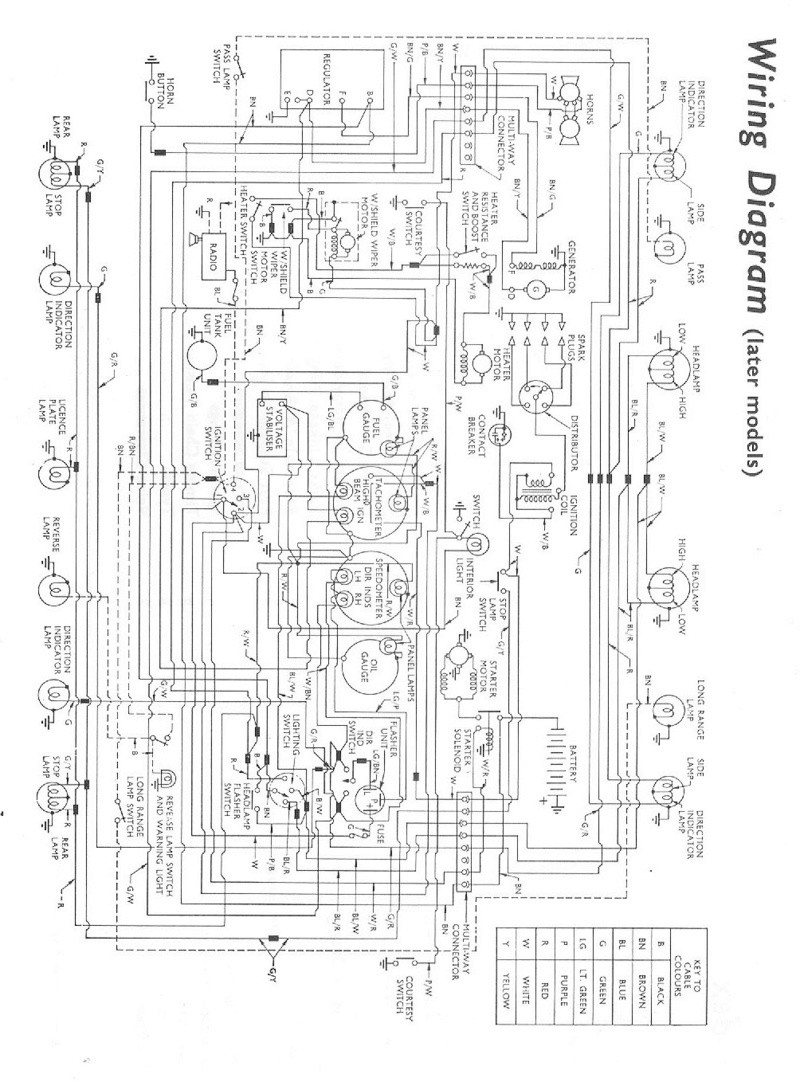 If your wiring has not been hacked to bits it should be easy to make a few connections at the original voltage regulator box and you can also shed some of the original wiring unless it is still nicely contained in your vehicles harness. We can work through this as it unfolds just ask. Just having a quick look at it seems that one line from the D post (ign. charge light) on the regulator should go to the L pin on the new alternator, the IG on the alternator could be supplied from the ignition coil POS +.
Anglia 100e modified
Prefect 100e stock
Top

Thanks Brett, yes I have the same box as you show. Iâ€™ll get my drawings out here and see what I can trace from your picture, great help thanks, wiring was never my strong point.
Life isn't complete until you have a pair of twin cams in the garage...
Top

if you want to keep the original look by keeping the regulator in place, here is what I did on a different vehicle...I gutted out an old regulator and used the blade terminal connectors on it as a junction block....I ran the BAT wire from the alternator to the BAT terminal on the regulator, then from the same terminal to the battery. In my case, I had the single wire alternator (self exiting) so only one wire (BAT) was used. I used the other blade connectors on the regulator for other connections such as AC and even put the AC relay and fuse inside the empty regulator. Looking at the wiring on the regulator, it looks just like factory wiring and no one knows its a gutted regulator.
Its just a thought...you could run and connect your 3 wires to an empty regulator and then on to their destinations.
Brett...that regulator looks just like a '69 Ford tractor.
Top

Mark, that could be a Ford tractor??? I just used that as a generic regulator picture. You have a good idea though using the box as a junction, it would look original.
Anglia 100e modified
Prefect 100e stock
Top

Good idea Mark, Iâ€™ll consider that but I guess originality has already gone out the window on this one.

Life isn't complete until you have a pair of twin cams in the garage...
Top
Post Reply
30 posts