Hello all!
My account had some issues, so I have a diffrent username!

I had to do some accurate measuring and some repeat cutting, but I got the flex line/solid fitting situation sorted out.
The first version wasn't happy and leaked at the carb feed line.
So I redid the entire top sections and it doesn't look super pretty, but it's leak proof!

I ran the fuel lines under 14v pump pressure for 5 mins and nad zero additional leaks.
Which is pretty impressive condisering how many disconnection points I installed. 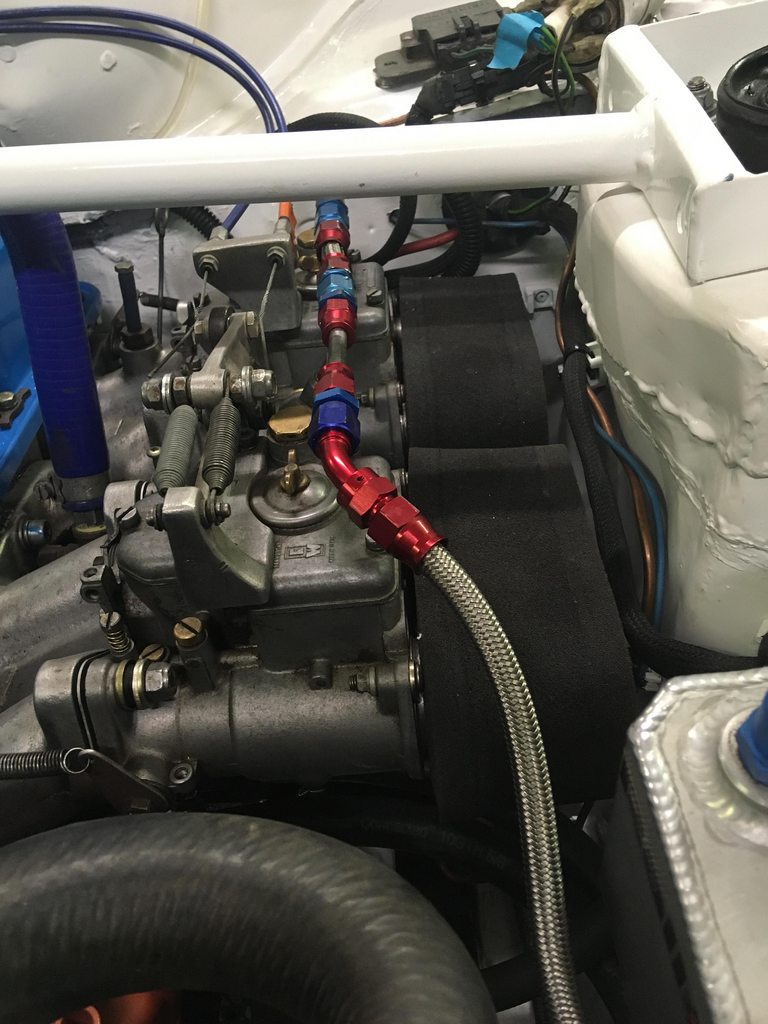 The trunk section pieces were neatly installed with quick disconnect lines, in the event of a pump failure during an event.
Since the car is in the historic category, only one fuel pump is allowed to run at any given time.
I'll be installing a piggyback pump before too long.
The top tank outlet fitting will have a dry break fitting hose equipped so it can be used for scruitineering fuel sampling, 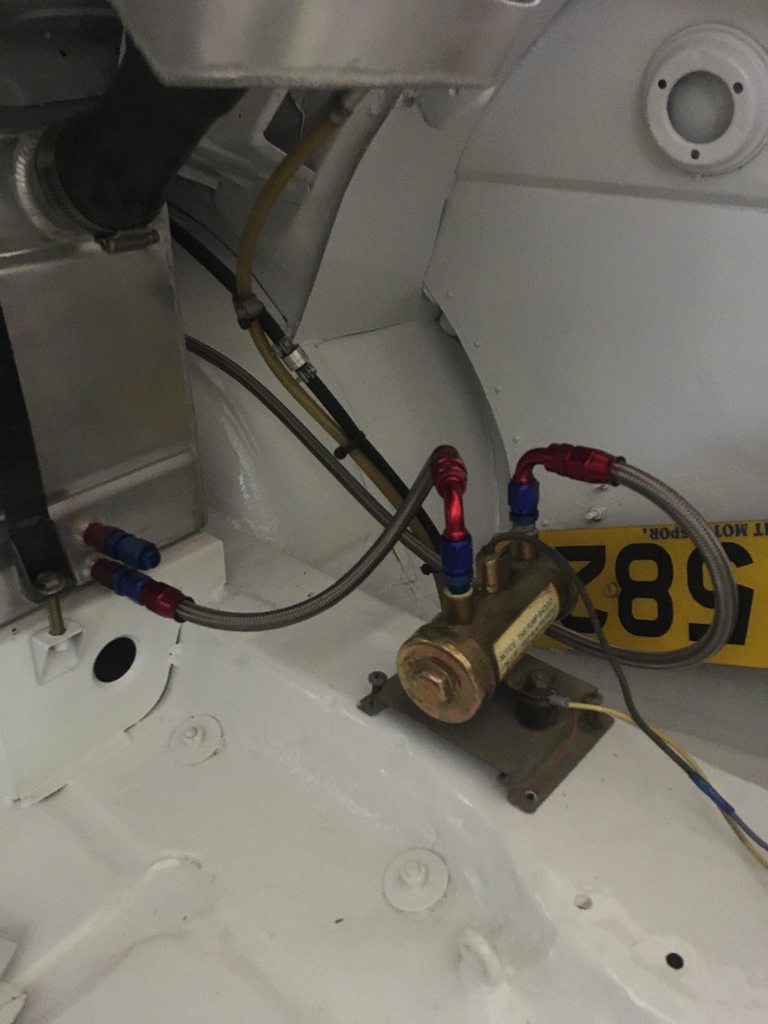 After the fuel pressure leak test, the car fired right up and ran perfectly normal.
But when I pressed the brake pedal, it went straight to the floor with zero resistance,

I had removed the fluid canisters during the engine bay repaint, so I figured that I had an air bubble in the system,
I would spend the next few days bleeing the entire system.
The car is set up with 2 master cylinders, one for the front, one for the rear.
I determined the rear was properly bled and working correctly, but just couldn't get any good pressure on the front. 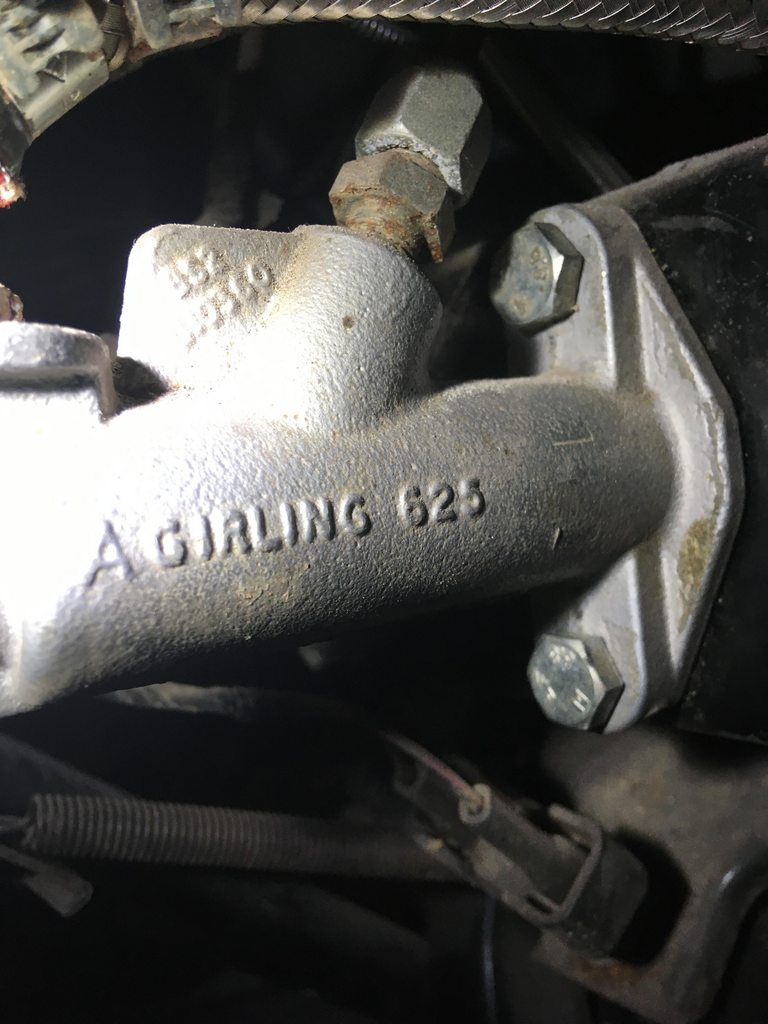 Luckily, new bits were avail. at Pegasus racing, and were reasonably priced.
The new piece arrived in just a few days and I quickly swapped it out.
More time was spent attempting to bleed the new piece and system but it eventually was sorted out after some very colourful language and the use of a radiator pressure test kit hooked up to the fluid resovour pumping out 20 psi.
I later learned through other related forums, that the system is in fact a real pain to get sorted out, At least I'm not the only one!
A quick test drive up the driveway, proved that the brakes were again up to as good as when I started the project.
Hooray!!!!!!!!!! That was not fun. 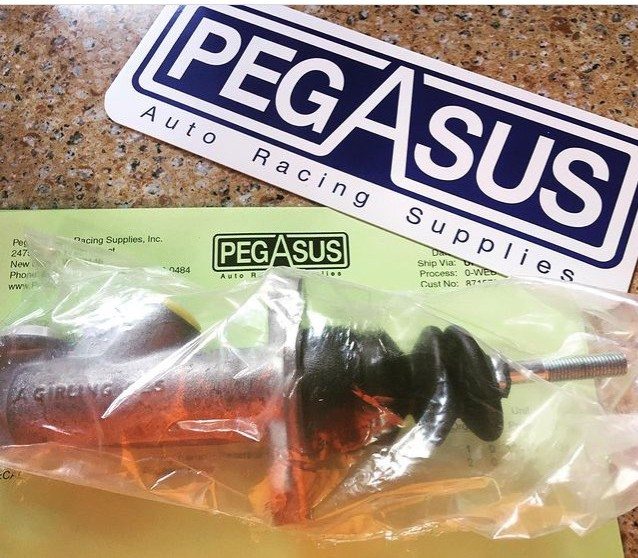 And the most current updates..
With the car back in one piece, I took out for a few runs and a coupe of low key car shows. 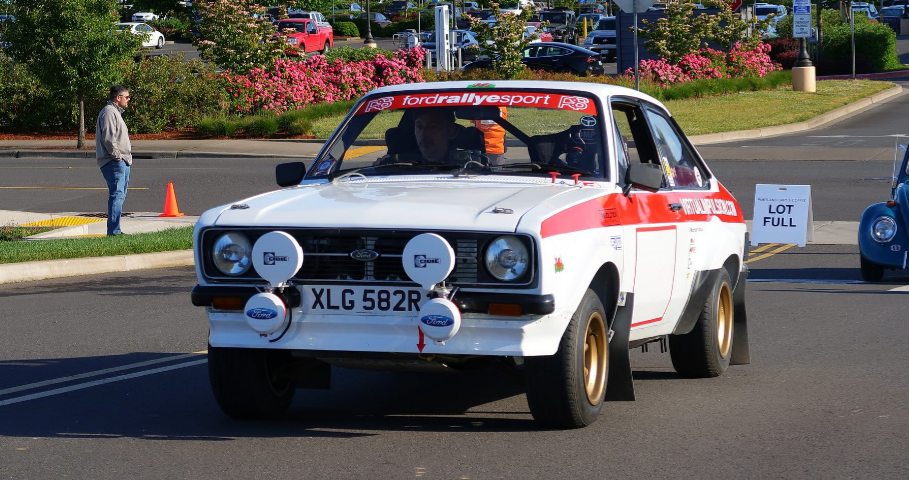 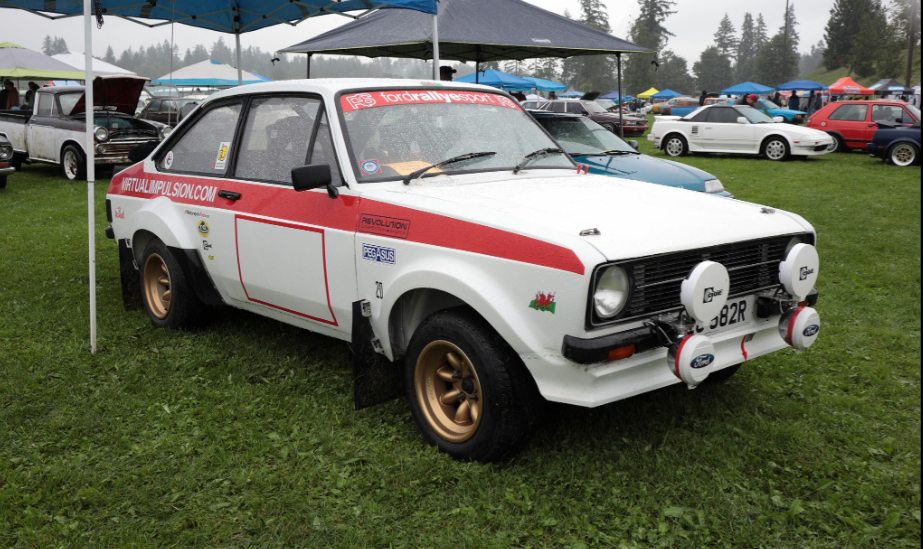 And ever since last July, it's been hibernating in storage.
I'll be dragging it out of the box this week, as it was reqested to be on display at the opener of the Oregon Trail Rally, at Poirtland International Speedway.
I am excited and feel honored for me (er...my car....) to be wanted to attend 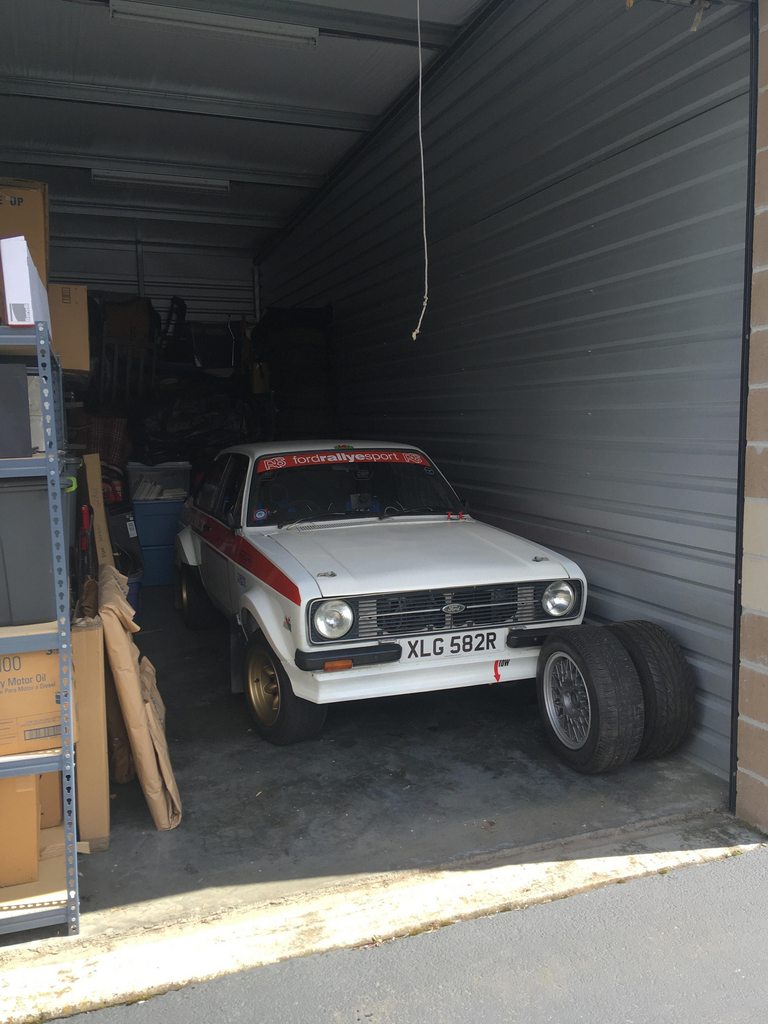 Thanks for the updates. Good to see your hard work on the project being rewarded.
Top

It was a busy weekend! Saturday was the local All Ford Show in Oregon, and to my pleasant surprise the car took a 2nd place in class award. I wasn't expecting that 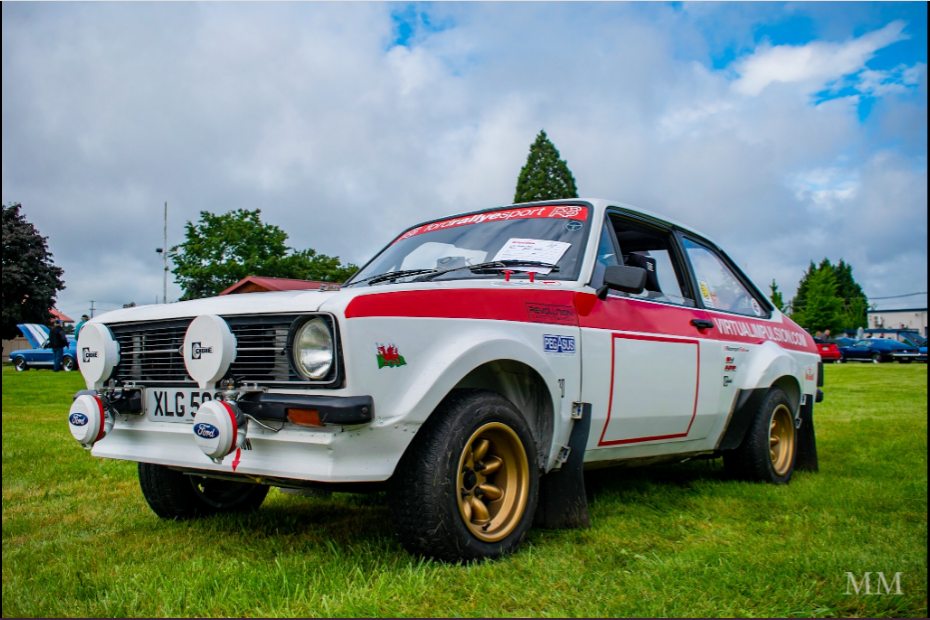 The next day was longer, but very much worth it, at The Old School Reunion show, in Washington.
Again, I was suprised to have the car get awarded Honorable Mention. It's been to this show loads of times, so I guess it was my turn haha.
Very grateful for the recognition. 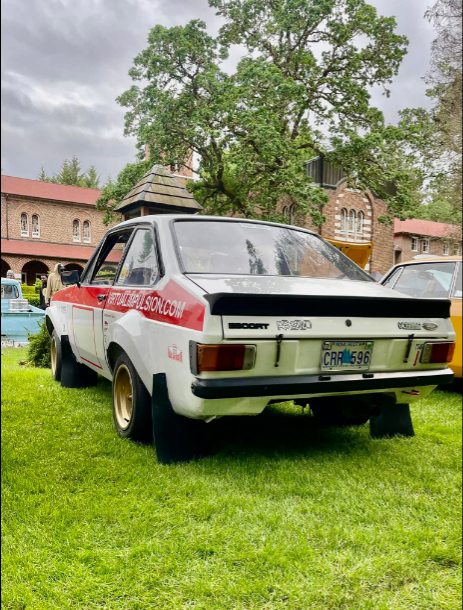 And was able to get a fantastic new ITG airbox set from the show at less than half the price new. 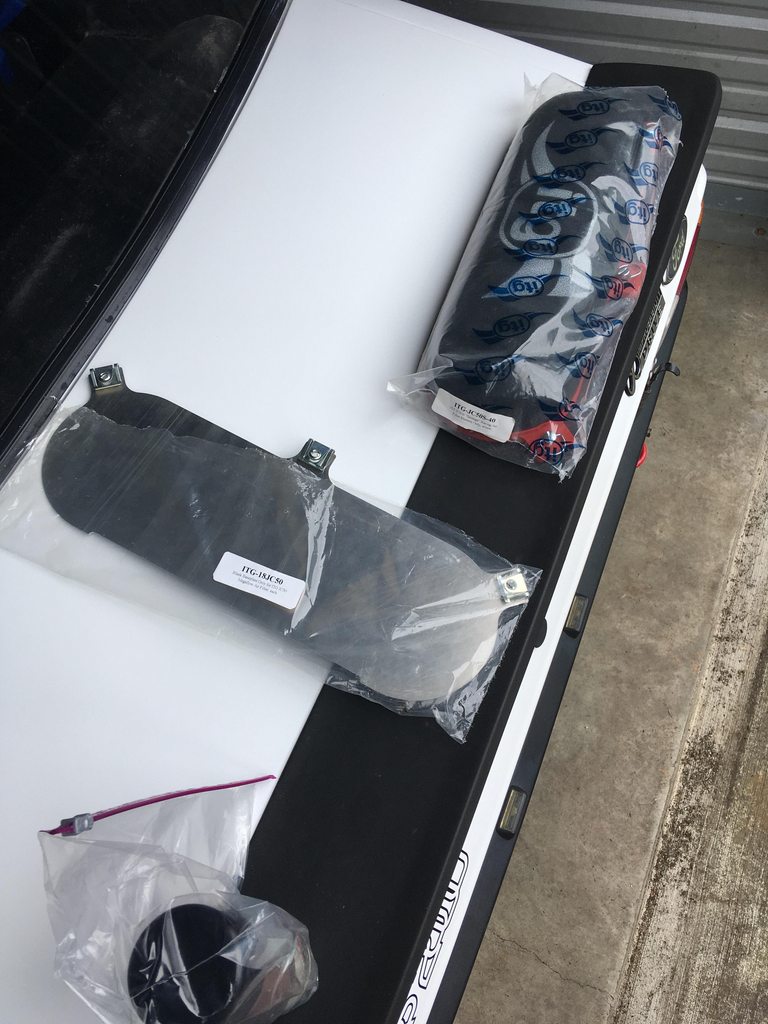 Congratulations on being rewarded for all of your hard work.
Top
Post Reply
67 posts